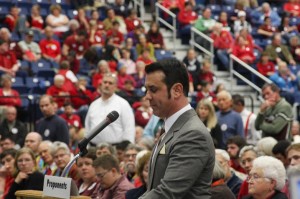 Before 2010, there were no reality TV shows about polygamy. Before this new decade, media reports only focused on criminals and cults that also involved polygamy.

Around the country, normal everyday unrelated consenting adult polygamists (now known as UCAPs) opposed the criminals and cults as much as everyone else. Even though living separately throughout America as private, normal, and innocent citizens, the lives of UCAPs were regularly put in danger by the outrageously terror-inciting media reports focused only on criminals and cults.

Under such rational fear, no other polygamists or pro-polygamy supporters felt safe enough to publicly stand up and correct the media. With the support of the TruthBearer.org organization which he founded, Mark Henkel became the only national voice to pro-actively and consistently educate the media and the rest of America: unrelated consenting adult polygamists (UCAPs) are normal mainstream families who also oppose the criminals and cults too.

That paved the way to the better media reports end even reality TV shows on polygamy after 2010.

We are the
National Polygamy Rights Movement for Unrelated Consenting Adults.

We will one day have our freedom!